The agreement for the operationalisation of Bus Service between Amritsar and Lahore, which was finalized during the second round of Technical Level talks held in New Delhi in September 2005, was signed on Decmber 21, 2005 at Lahore. It was decided that this bus service would commence on January 20, 2006 from Lahore to Amritsar and on January 24, 2006 from Amritsar to Lahore.

First Lahore - Amritsar bus from Pakistan “DOSTI” (Friendship) crossed the Joint Check Post of the Wagah Border at 11.30 am on January 20, 2006. It bridged the gap between two Punjabs (East and West), that were divided by the Redcliff Line 58 years ago. The people showered rose petals, as the Punjab Police band played the song “Ghar aaya mera pardesi”. When the bus entered the Indian Territory, A warm welcome was given to the DOSTI bus by Mr.Sardul Singh (Excise Minister, Punjab), Mr.Raj Kumar (An M.L.A.), Mr.Sunil Dutti (Mayor, Municipal Corporation Amritsar), Mr.Narinderjeet Singh (Director State Transport, Punjab) and Mr.Kirandeep Singh Bhullar (Deputy Commissioner, Amritsar).

The Indian Bus “PUNJ-AAB” (named after five rivers in the state) is the third road link between India and Pakistan. First bus link between India and Pakistan was launched in 1999 between Delhi and Lahore. The second bus link opened between Srinagar and Muzzafarabad in Pakistan in April 2005. The fourth bus service between Amritsar and Nankana Sahib linking the city of Golden Temple with the birthplace of Guru Nanak Dev Ji – The Founder Of Sikh Faith – will be begin very soon.

The bus service would also help in increasing trade between both the countries. The Joint Secretary of Ministry of Communication, Pakistan, Mr.Firdaus Alam, said he was hopeful that more and more passengers would use the bus service in future. He said both India and Pakistan were contemplating opening VISA centers in Amritsar and Lahore to make the 66 KMs long journey hassle-free and enjoyable. 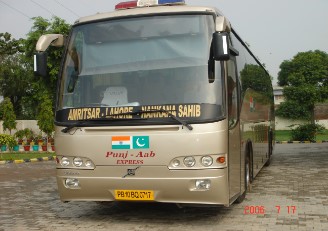 It is for the information of the general public that the Amritsar – Lahore Bus will operate on regular basis on Tuesday and Saturday from Amritsar and on every Wednesday and Friday from Lahore. The schedule of operation of this bus service will be :-

Tickets are available at ::
International Bus Terminal,
Youth Hostel,
G.T.Road, Amritsar.
The Passengers have to report at least two hours before the departure of the bus.

1. Passport: All intending passengers should have a valid passport.
2. Visa : The Intending passengers will obtain VISA from the High Commission of the Islamic Republic of Pakistan at New Delhi for the date/dates on which he intends to visit Pakistan.

After fulfilling the above mentioned prerequisites, tickets can be obtained from the reservation counter at International Bus Terminal, Youth Hostel, G.T.Road, Amritsar on payment of Rs.1200/- for a passenger of 12 years and above age and Rs.800/- for a child of above two years, but below 12 years of age. Children below two years of age will be allowed to travel free.